This 40 Ton whale was so happy that it was literally FLIPPING OUT ! It is extremely rare for a whale this huge to get out of the water entirely and jump back into the water like it is a young dolphin. This was an enormous adult humphback whale and this breathtaking site was captured by a scuba diver named Craig Caperheart and three other divers who were with him saw this beautiful phenomenon.

Craig captured the whale propelling away to glory in early July off the southeastern coast of South Africa.

Caperheart claims that no one has ever recorded an adult humpback leaping entirely out of the water though that remains unconfirmed there is no denying that this was an extremely rare phenomenon. 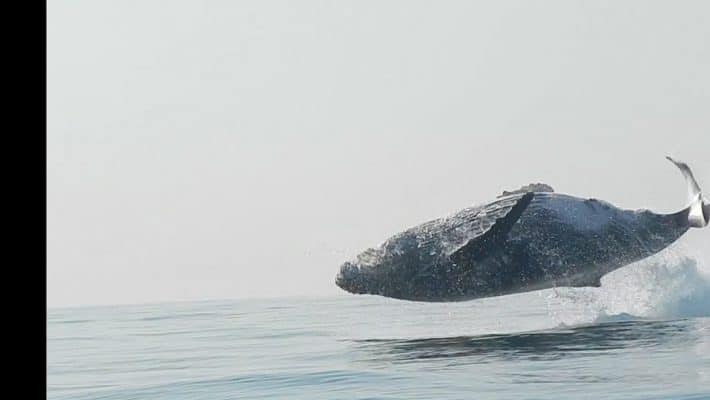 Your Guide To The World's Most Unique Experiences
PrevNext

We use cookies on our website to give you the most relevant experience by remembering your preferences and repeat visits. By clicking “Accept”, you consent to the use of ALL the cookies.
Cookie settingsACCEPT
Manage consent

This website uses cookies to improve your experience while you navigate through the website. Out of these, the cookies that are categorized as necessary are stored on your browser as they are essential for the working of basic functionalities of the website. We also use third-party cookies that help us analyze and understand how you use this website. These cookies will be stored in your browser only with your consent. You also have the option to opt-out of these cookies. But opting out of some of these cookies may affect your browsing experience.
Necessary Always Enabled
Necessary cookies are absolutely essential for the website to function properly. This category only includes cookies that ensures basic functionalities and security features of the website. These cookies do not store any personal information.
Non-necessary
Any cookies that may not be particularly necessary for the website to function and is used specifically to collect user personal data via analytics, ads, other embedded contents are termed as non-necessary cookies. It is mandatory to procure user consent prior to running these cookies on your website.
SAVE & ACCEPT