This soup from Mexico is so rocking, it literally has rocks in it!
Magazine Menu
March 12, 2017May 31, 2017
by GoBeepBeepin Unique Experiences, Incredible Foods & Drinks

This soup from Mexico is so rocking, it literally has rocks in it !

Originated in San Felipe Usila, a town in southern Oaxaca, this pre – Hispanic dish, the rock soup  has survived to this day.

It’s a dish made by Chinantec men as a homage to their wives. Chinantec people are the ones who speak Chinantec language and reside in San Felipe near the mouth of Papaloapan River.

Men give their wives fancy rocks to adorn their fingers but the rocks given by the Chinanteco men are much cheaper but far more valuable as the men make it themselves for their better halves. Women do not prepare this soup as they are often the ones who are offered this delicacy.

It is also used as an offering to distinguished people. The soup also offered to family and community becomes a symbol of unity, respect and honour.

The soup contains tomato, chili , onion, epazote (a herb) which adds to its unique flavour, fish and specially selected rocks.

This soup was made when the Chinantecos discovered fire and started to cook. It was originally cooked with trout and shrimp only. Lately it has been modernized and clam and octopus are also added to this dish.

The main ingredient, the rocks, are special rocks found only in rivers. The soup is to be cooked in a really high temperature to cook the seafood perfectly.

The stones once used are not used again as they are weak and can break easily. After adding all the ingredients in the soup, the rock which is preheated is added to the broth for 3-4 minutes and it sizzles away to glory. 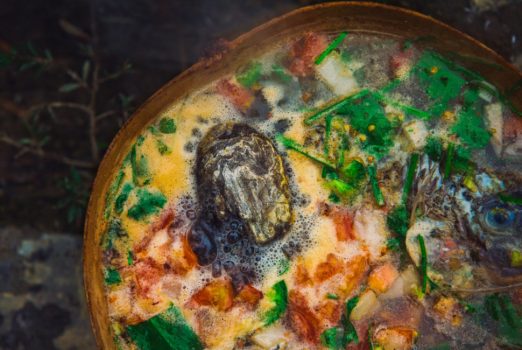 On the highway between Oaxaca city and the town of El Tule , a family restaurant called Caldo de piedra run by Cesar Gachupin de Dios is ready to serve you.

Cesar learnt to make this soup when he was 10 years old. He used to follow his parents to the river banks and watch them make the soup for the family.

“ It’s a cultural tradition transmitted from generation to generation” as he reveals that his father learnt it from his father,” says Cesar He adds that “The soup is a symbol of gratitude, made to honour all creations.”  “Earlier , “ he said, “the soup was only consumed by governing and ruling class” He also adds that what made the soup special is that it is made from love and comes from the heart.

COOL TIP  : Visit the restaurant called Casa Oaxaca which is known for modernization in food and changing menus thrice a year. This soup is also available there with a variety of new ingredients which makes it modern but, they make sure it does not lose its authentic taste and what it stands for.