Most Bizarre Foods and Drinks Around The World That You Wouldn’t Dare Feast on!

It might seem very enticing to push yourself off a cliff into the cool turquoise water. But when it comes to exploring the most horrendous cuisines around the world, are your taste buds gallant enough to take a plunge? Maybe yes, maybe no.

You’ll be able to decide that for yourself once we take you on this gastronomical journey of bizarre foods and drinks which are just a colossal middle finger to all the foods you have ever tried! 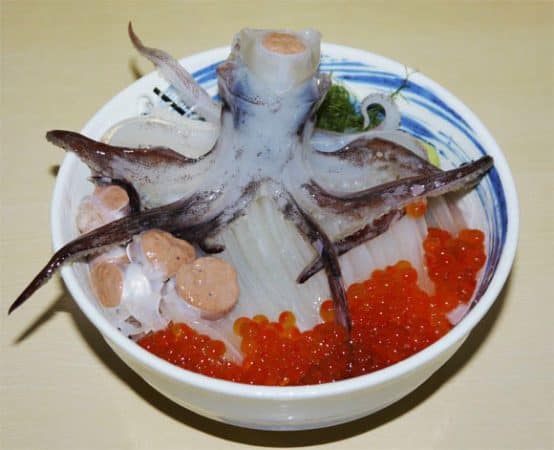 For some, the very thought of popping a raw fish into their mouths is bizarre enough. But the idea of having your food moving on your plate, even though it’s already dead, takes it to a whole new level.

Enter this dancing rice squid bowl stuffed with lots of seafood and garnished with a beheaded squid. It resembles any other Japanese dish until you pour soy sauce over it. That is when the frightening part kicks in! The squid magically comes back to life, wagging its tentacles up and down on the bowl. It appears as though the squid is dancing on your meal and the sight of it will surely make you scream out loud!

No, please don’t go running out of the restaurant! This happens because of the muscle spasm caused by the sodium in soy. Now, those of you inclined to trying this will likely try regardless of how horrific it might sound. Although according to culinary terms it’s passable.

Famous Restaurant: The restaurant which first served ​Odori-don is Ikkatei Tabiji and is still the best in Hokkaido, Japan This soup is so bizarre that some might hardly call it a soup at all. But, if you happen to be a fan of the Twilight saga then this dish might go down well with you! Traditionally, hailing from Vietnam it is made out of duck’s blood, cooked gizzards and topped with some herbs and peanuts.

So, Is it cooked or eaten raw? The soup is refrigerated and then served chilled before the blood loses its jello like consistency. How does it taste like? Having being prepared out of pure blood, it has a rich taste with kind of a metallic flavour.

However, in different cultures the source of the blood varies depending on the benefits it would provide. Like for instance: Koreans like feasting on the ox’s blood because it is believed to cure hangovers. So, the next time when a hemophobic friend of yours is all sloshed you can make him/her try this bloody soup without letting them know what it is made of. 😉 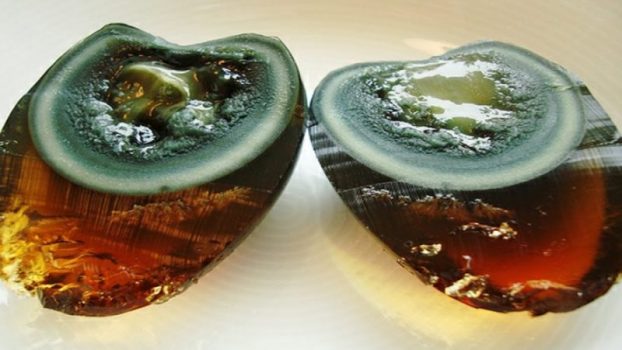 Unlike their name, century eggs are not that old, only their history is. But by the looks of it, you might consider them to be at least a century old because they are nothing but preserved eggs and widely relished all across China and Vietnam.

The preparation involves preserving of duck, chicken or quail eggs in a mixture of rice husk, clay, quicklime ,wood ash, salt and then coated with rice chaff for 3-4 months. Over the course of four months, the yolk of the egg turns dark olive green with a creamy consistency, whereas the white turns amber and gelatinous. So, basically, the eggs are served when they are rotten!

Although, these ugly looking ova might appear the farthest thing from appetising, on the contrary, are served as traditional appetisers and can very well be paired with wine or bubbly champagne. 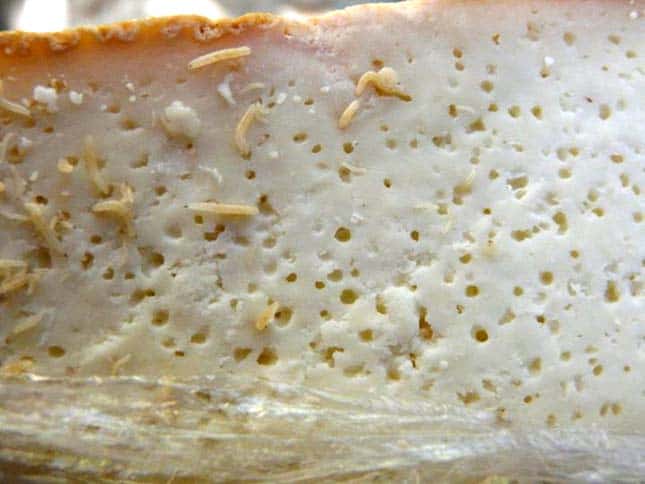 The term literally means “Rotten cheese” and consuming anything rotten means you’re bound to have at least 2-3 round trips to the hospital. Can anything be more unsettling than risking your tummy’s life just to taste a weird variety of cheese that exists on our planet? Well, you might give yourself a benefit of doubt when I tell you that Gordon Ramsay has tried this hearty delicacy of Sardinia.

The cheese is made by heating sheep’s milk and is left to settle down for about 3-4 weeks. Later, flies are invited to breed, the eggs then hatch to convert into larvae which thereafter feed and defecate on the cheese giving it a very distinct flavour and consistency. So, this is nothing but cheese mixed with maggot’s shit and of course the maggots themselves!

Are you gutsy enough to try this bizarre variety of cheese? Well, if you can forget about the maggots for a second, and stop abstaining yourself from tasting it, then it isn’t that gross. It’s a strong-tasting, visually unappealing delicacy which can be washed down with a quick swig of wine. 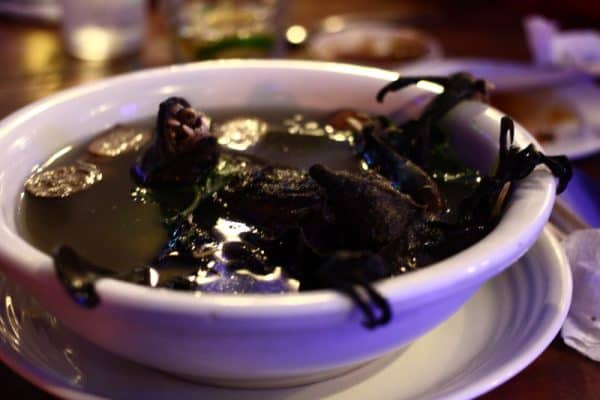 This officially tops the list of the most bizarre foods! Traditionally belonging to Guam this is the most hideous soup you would ever have. I mean just by looking at it, you can feel as though the chef has forgotten to shave the fur off the bat’s body before putting it into the cooking pan.

The preparation of this dish involves a large fruit-eating bat cooked in coconut milk, vegetables, spices and is cooked for several hours.

I know exactly what’s next on your mind! Whether the fur is edible or not ?  Hell yes! It’s the speciality of this particular delicacy to eat it along with the fur intact on the bat’s body! Are you kidding me? Like seriously! You require extra courage X 3 times to try sipping on this soup. Many people find it delicious, although having to know that a furry rodent-like head floating above the soup is staring at you can be disconcerting. 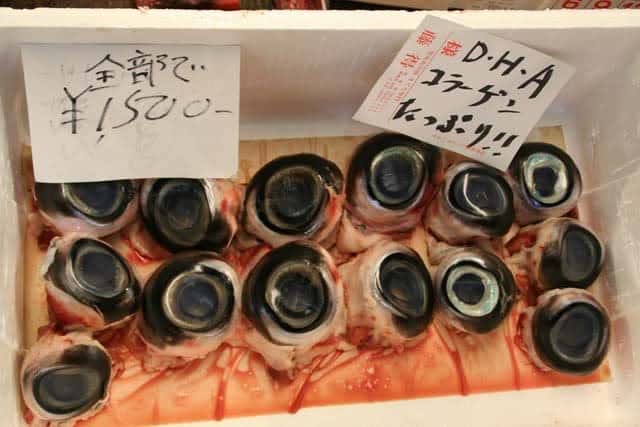 Does it make your feel awkward when someone stares at you whilst you are having your food? If yes then lets take this awkwardness to another level by letting the food in your plate stare back at you. Sounds creepy?

A fantastic source of omega-3 fatty acids, Tuna eyeballs are consumed as a tasty treat in many cultures. Even though this delicacy is not good for the squeamish, the tuna eyes have a rich, fatty flavour which many foodies love eating. It has a delightful crunch to it and the texture seems a bit chalky .

You might shrug off the fact that you are rolling an eyeball in your mouth once you are introduced to the plethora antioxidants it is loaded with! Also, if you are a regular eater of fish than you might end up finding it to be the best-tasting part of the fish.

Big ups to this traditional drink belonging to China and Korea for being one of the most bizarre drinks in the world.

So, how is this wine prepared? It is nothing but rice wine having drowned baby mice in it. Only babies because the makers of the wine were kind enough to compromise on being less disgusting by not putting the fur ones!

When the mice are just 2 to 3 days old they are dropped into the wine while they are still alive and are then allowed to ferment for the next 12- 14 months. Apparently, it is said to taste like petrol. So, if you happen to be one of those who goes bonkers with the fragrance of the petrol can try this out. Moreover, it is savoured as a healthy tonic instead of a hooch! Sannakji is one of those bizarre foods that actually counterattacks on being eaten, so you cannot take this delicacy lightly. A baby octopus is served as bite-sized pieces or whole, and lightly seasoned with sesame oil. Hailing from Korea, this dish is served up while the creature is still squirming and wiggling in the platter, essentially to flaunt its freshness.

Although, this maybe what makes this dish an entertaining speciality, it also is a reason for number of deaths in Korea each year.

The still active suction cups on the octopus arms stick to the mouth and attempt to climb back up the throat if the diners do not chomp it well before pushing it down the red lane. This can result in choking the person to death. The flavour is quite mild and bland, but the texture is out of this world and the ginger soy sauce served along with the dish makes it all the more pleasurable. 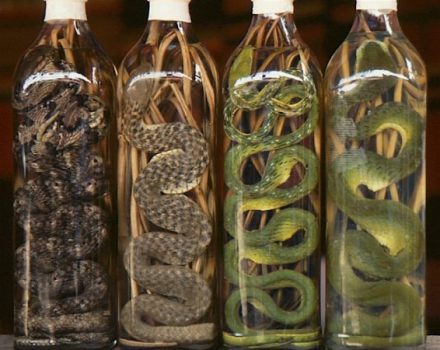 This is an epitome of a tasty tipple that comes with a far more potent bite. But it will leave you with hair raised all over your body as you catch a glimpse of this bottle of wine filled with slithering, venomous creatures and other creepy crawlies.

This alcoholic beverage was originated in Vietnam and now is widely savoured around Southeast Asia and is believed to be a  strong aphrodisiac.

There are two ways of preparing this— Either they drown a live snake in the rice wine, seal the bottle and allow it to ferment or they freeze the snake, gut it, bleed it, sew it back up, then put it into the bottle.The benefit of opting the latter reduces the foul smell that the snake’s gut produces.

Also, If you gut the snake,  you save yourself from starring in the 5th part of Anaconda because hey, that gutless dead snake won’t attack you. 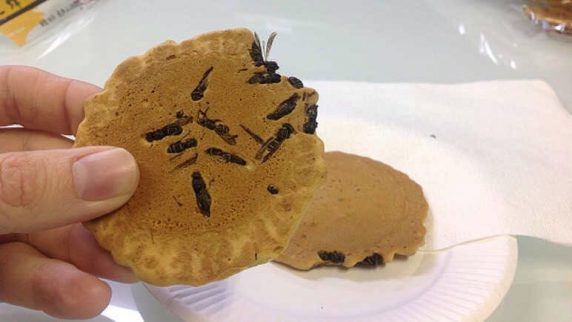 Ever did you accidentally chew on some insect and felt disgusting about it the whole day? Even now when you are thinking about it , it is leaving you with a very nasty feeling. Chomping down insects with their eyes, legs, and antennae still intact may make you feel very squeamish, but in Japan, there are people who relish crackers with a hearty portion of little black wasps embedded through it.

It is believed to have a whopping 81% of protein which is highest than any edible insect. Now, these wasps aren’t just any old wasps, they’re been specially farmed and nurtured for eating. They are then boiled, dried, and added to the rice mixer.

The sweet and slightly savoury taste of the senbei cracker masks the taste of the wasp. It certainly is a disgusting sensation to bite down on something round and squishy and know that it must have been either a head or an abdomen, and when a wing or a leg gets stuck between your cheek and gums it will not be the best feeling in the world. 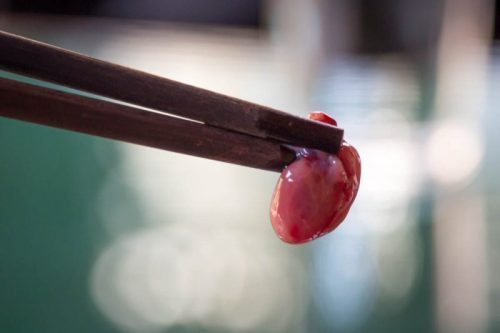 Another heart wrenching delicacy that falls under the category of bizarre foods is the still-beating-heart of a cobra. Originating in Vietnam, it is one of those foods that many locals enjoy feasting upon, mainly because it’s believed to enhance man’s virility.

It is savoured in two ways— either the little heart is dropped into a shot glass and then filled with rice wine, diner is expected to gulp it down in one go, or The heart, is dropped into the plate for you to eat it while it’s still beating.

So, apparently you get to select the cobra of your choice and then you can even watch the creature struggling for its life when it’s being slit open on your table. That just sounds perfect for a heartless person and Chef celebrity like Anthony Bourdain and Gordon Ramsay are known for trying this bizarre delicacy!

Price– You have to buy a whole snake – it costs $50-70\kg depending on the type of snake you purchase.